Category: In the News

Not So Fast: OCR’s Fact Sheet on DEI Efforts is Only Half the Story

in: In the News, Office for Civil Rights

On January 31, 2023, the Department of Education’s Office for Civil Rights released a fact sheet clarifying that diversity, equity, and inclusion training and similar activities “are not generally or categorically prohibited” under Title VI of the Civil Rights Act of 1964. The OCR fact sheet provides a list of activities, such as DEI training, training on the impacts of racism or systemic racism, cultural competency and other nondiscrimination training, and using specific words, such as equity, discrimination, inclusion, diversity, systemic racism, or similar terms in school policies, programs, or activities. It says that Title VI does not “categorically” prohibit such activities and that deciding if there is a violation requires assessing the totality of the circumstances in each particular case.

According to OCR’s press release, it issued the fact sheet “in response to confusion regarding the legality of [DEI] activities in schools.” Although OCR does not elaborate, stories about the importance of conservative activism around how school teach racism abound. The issues are similar in the Title IX realm, with a small but mighty contingent of challengers to programs for girls such as coding camps, scholarships, grants, and mentorships claiming that such programs, which are aimed to remediate past and current discrimination against women in various spaces, are discriminatory against men.

Does OCR’s fact sheet remove the confusion? Not even close. Keep reading to find out why. 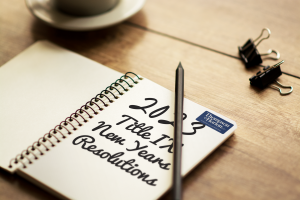 We are barely into 2023, and it’s shaping up to be the biggest year yet for Title IX. From transgender bathroom bans and athletic participation battles to growing scrutiny on general athletics equity and pregnant and parenting students, Title IX will continue to have its moment in the sun in 2023 as it has for the past few years. Of course, the biggest news for Title IX in 2023 will undoubtedly be the issuance of the Biden administration’s new Title IX rule. The Department of Education recently confirmed that it intends to hoist the new regulation on schools in May 2023. Schools, colleges, and universities will once again have to comply with an entirely new grievance structure quickly over the summer.

Those who spent the summer of 2020 scrambling to prepare for the 2020 Title IX rules know that implementing new rules over the summer is a huge feat. If you haven’t already resolved to begin preparing now to be ready for that process when it comes, you should! Like any other New Year’s resolution, there is a risk of giving up without a plan. Don’t have one? Don’t worry. The Thompson & Horton Title IX team has you covered. Keep reading for the essential action plan to help you achieve your Title IX goals in the New Year.

in: In the News, Pregnancy and Parenting

The U.S. Department of Education’s Office for Civil Rights recently released a small guidance document with a big warning message to schools, colleges, and universities: Title IX requires educational institutions to protect their students and employees from discrimination on the basis of pregnancy, including pregnancy termination and recovery therefrom. That means schools cannot treat students or employees differently because they obtained an abortion. Schools must also treat abortion like any other temporary disability for hospital and medical benefits, services, plans, and policies. And, under Title IX, schools must provide leave to individuals for termination of pregnancy or recovery therefrom for as long as the student or employee’s physician says it is medically necessary. The guidance, issued on the 100th day after the U.S. Supreme Court overturned Roe v. Wade, does not provide new law. But it is a clear warning to schools that specific actions concerning students and employees seeking or who have received abortions could lead to administrative enforcement from OCR.

What They Don’t Know Might Hurt You: Avoiding the Negative Impact of Journalistic Rushes to Judgment on Your Title IX Process

in: In the News

The renowned journalist and activist Ida B. Wells once said, “The people must know before they can act, and there is no educator to compare with the press.”

Today, however, journalism is quite different from before the turn of the century. Almost any story can be published, with no requirement that the writer understands, let alone includes, the full context of the issue. “Stories” sometimes “break” on social media threads, with no author or editor in sight to control unfettered opinions from being mistaken for “news.” And even in more established publications, the desire to offer the most sensationalistic coverage in the shortest amount of time creates an environment in which presenting the whole picture is often not the goal.

The result in situations involving Title IX can be disastrous for schools, colleges, and universities. News outlets, bloggers, and social media posters present an incomplete and often inaccurate account of the Title IX process to your community. The results can range from a turnover churn of Title IX administrators (with recent reporting suggesting two-thirds of Title IX coordinators have been in their position for more than three years) to bomb threats.

What are the risks, and how can your school district, college, or university defend against or deal with such an incident?

in: Basic Skills, In the News

The recent Johnny Depp/Amber Heard trial felt a bit like a black hole; no matter how hard I tried to pull away, the gravity eventually sucked me in. My reasons for wanting to stay away were simple: As an attorney and an expert in Title IX matters, I know how vital impartiality is in deciding these challenging cases. As a working parent and spouse, I knew I would not have the time or energy to watch every hour of testimony and review every piece of evidence. I knew it would be difficult not to base any opinions I might form about the case on my own biases and prejudices under those circumstances, particularly with the onslaught of media opinions on both sides. So best to stay away, I thought, if I can.

I couldn’t. In the end, I read many articles, watched some footage, and even listened to a few podcasts on the trial. I still do not believe I am in a position to make any of the many sweeping claims that the media and advocates on both sides of the aisle have made about the verdict. But the case does provide some important takeaways and practice tips for Title IX administrators. Here are the top three, in my opinion.

Misgendering Myths, Facts, and Mayhem: What You Should Know About the Kiel, Wisconsin Title IX Case

in: First Amendment, In the News, Presidential Transition, Transgender Issues

Yesterday was the first day of Lesbian, Gay, Bisexual, Transgender, and Queer (LGBTQ) Pride Month. At Thompson & Horton, we will recognize Pride Month alongside the 50th Anniversary of Title IX with free weekly webinars throughout June (Thursdays at 1 p.m. starting today!) and blog posts focused on Title IX, including LGBTQ+ issues facing schools, colleges, and universities.

Perhaps the hottest story in the Title IX/LGBTQ+ world right now involves Kiel Area School District. The Wisconsin school district has received multiple bomb threats and tremendous media attention and scrutiny regarding complaints against three eighth-grade students alleged to have created a hostile environment for a peer by refusing to use the student’s preferred pronouns. As with many things “Title IX,” untangling the truth from the fiction can be a challenge, particularly when there is so much pandemonium around the case. Here’s what you need to know about this case and how it might impact your school, college, or university.

A first amendment blog for school administrators and attorneys.

Insights from the legal minds at Thompson & Horton

Employment Tips and Legal Updates for School Districts, Higher Ed, and Beyond