According to the seven-judge majority’, bathrooms can be segregated by “biological sex” as evidenced by the student’s enrollment documents even if doing so excludes transgender students from bathrooms matching their gender identities. Such a rule is not required, but the decision gives a green light within the Eleventh Circuit’s jurisdiction (Alabama, Florida, and Georgia) for schools to choose to implement such a rule.

The decision, Adams v. School Board of St. Johns County, Florida, conflicts with decisions by two other Federal appellate courts and does not change the law in those states (Illinois, Indiana, Maryland, North Carolina, South Carolina, Virginia, West Virginia, and Wisconsin). So, it may be well-suited for review by the U.S. Supreme Court.

Unless and until that happens, however, the 150-page decision adds to school leaders’ confusion about handling requests from transgender students. The case leaves many unanswered questions, even for schools within the Eleventh Circuit’s jurisdiction and jurisdictions like the Fifth Circuit (Louisiana, Mississippi, Texas), which do not have a conflicting decision. It could even raise questions for any employer subject to Title VII when addressing a request about facilities by a transgender employee. So much for legal opinions clarifying the law for us!

So, what do you need to know? Keep reading for four fundamental takeaways to help cut through the confusion on this critical case.

Misgendering Myths, Facts, and Mayhem: What You Should Know About the Kiel, Wisconsin Title IX Case

in: First Amendment, In the News, Presidential Transition, Transgender Issues

Yesterday was the first day of Lesbian, Gay, Bisexual, Transgender, and Queer (LGBTQ) Pride Month. At Thompson & Horton, we will recognize Pride Month alongside the 50th Anniversary of Title IX with free weekly webinars throughout June (Thursdays at 1 p.m. starting today!) and blog posts focused on Title IX, including LGBTQ+ issues facing schools, colleges, and universities.

Perhaps the hottest story in the Title IX/LGBTQ+ world right now involves Kiel Area School District. The Wisconsin school district has received multiple bomb threats and tremendous media attention and scrutiny regarding complaints against three eighth-grade students alleged to have created a hostile environment for a peer by refusing to use the student’s preferred pronouns. As with many things “Title IX,” untangling the truth from the fiction can be a challenge, particularly when there is so much pandemonium around the case. Here’s what you need to know about this case and how it might impact your school, college, or university.

On February 18, 2022, Texas Attorney General Ken Paxton issued an opinion asserting that certain procedures and treatments for transgender children are child abuse under the Texas Family Code. The opinion, which does not carry the force of law, directed members of the public and licensed professionals to report procedures such as puberty blockers, hormone therapy, and gender reassignment surgery on children to the Texas Department of Family and Protective Services. The news has led to understandable questions from Texas educators about whether they, as mandated reporters, are required to report families that provide transgender youth with treatment based on the advice of their physician and the prevailing standards of care.

The confusion is particularly acute because reporting a transgender child’s family to DFPS for elective services while not reporting similarly-situated cisgender students could be discrimination under Title IX. The U.S. Department of Education’s Office for Civil Rights would also likely find that a school that reports transgender students to DFPS—especially in tandem with actions required by other state laws, such as Texas’s ban on children playing sports with a gender that does not match their gender assigned at birth—can create a “hostile environment” for transgender students under Title IX. Because of federal supremacy, schools cannot defend against an OCR complaint or federal lawsuit under Title IX by arguing that they were following state law.

Because of the substantial confusion and risk related to this issue, schools should work closely with legal counsel to develop a plan of action to handle mandated reporting and other issues involving LGBTQ+ students in schools. Training of mandatory reporters is essential. We offer more background, details, and analysis of the Texas AG Opinion below.

Are “Gender Plus” Bathrooms New? And How Should Schools Handle Them? 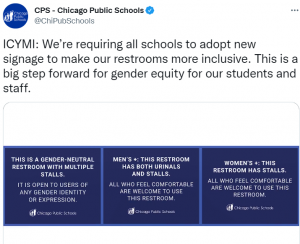 As many of you know, I was a Chicago Public Schools parent until four months ago, when my family and I moved to Dallas. So, I have been watching with great interest a battle that has been unfolding following a CPS announcement that its schools would begin using new signs for school bathrooms. Some bathrooms, including single-occupancy restrooms and some multi-stalled restrooms, are labeled as gender-neutral, while the rest are labeled as “girls plus” and “boys plus.” Is this something new? And how should schools handle “gender plus” bathrooms? Keep reading to learn more.

A first amendment blog for school administrators and attorneys.

Insights from the legal minds at Thompson & Horton

Employment Tips and Legal Updates for School Districts, Higher Ed, and Beyond